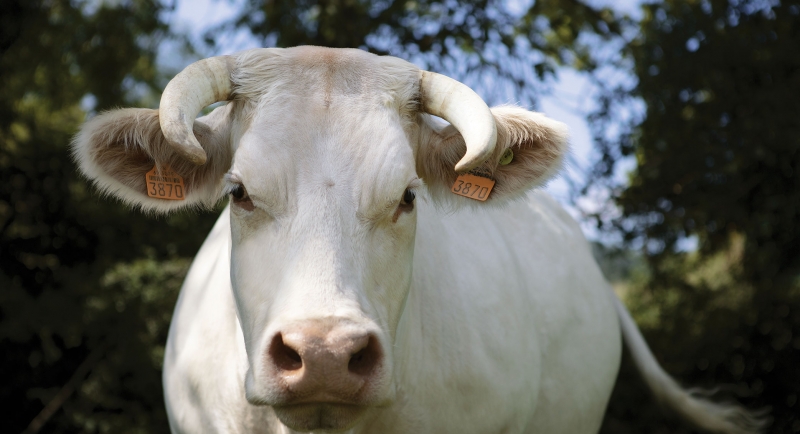 Her name could not be more appropriate: Idéale, a superb, sturdy six-year-old Charolais, has been selected to represent her breed and get top billing for the 2020 edition of the Show. Something of which Jean-Marie Goujat – her owner from the Monts du Beaujolais – is extremely proud. “We are tremendously honoured that Idéale has been selected as the mascot for the 2020 Paris International Agricultural Show. She perfectly embodies the Charolais breed”.

Idéale has got everything going for her: a short head, a broad muzzle with nice sharp teeth, fine crescent-shaped horns which curve perfectly around towards her eyes (referred to as cabettes), a wide and muscular back, thick haunches, etc. The perfect ambassador for her breed! Idéale is docile and does not mind people going up to her. And she cannot hide her pleasure when being stroked. She is very maternal and regularly calves once a year.

One cannot fail to recognise the legendary Charolais cow. With around 1.6 million heads throughout France, it is one of the country's main breeds. Originally hailing from the Charolais-Brionnais area in France’s Saône-et-Loire département in the Burgundy Franche-Comté region, the Charolais gradually spread to neighbouring regions and then throughout the country. In so doing, it became France's leading brood cow, present in practically all of its regions. It is profitable and yields high-quality meat. They live in keeping with nature's natural cycles and suckle their calves for the first nine months, until they have been weaned. Since they eat grass, they preserve, shape and maintain the landscape and have a key economic role to play in the French countryside. Originally a draught animal, the Charolais is hardy breed that can adapt to any environment and any climate – which is why it is now present in 70 countries across the world.

For 33-year-old Jean-Marie Goujat, the Charolais breed is a family passion first and foremost. His herd, made up of 125 cows reared on an extensive 187 ha environmentally-friendly integrated farm, was created by his grandfather on the Monts du Beaujolais, around 45 km from Charolles, where the breed originates. Since 2014, Jean-Marie has been a member of the family farm association, together with his father Bruno and his brother Laurent.

"Right from when we were children, our parents have always understood how passionate we are about Charolais cows. They never done anything to stop us from doing exactly what we wanted – quite the contrary".

A love for the profession and expertise which is passed down from generation to generation, and which Jean-Marie will pass on to all visitors to the next Paris International Agricultural Show: “Being a livestock farmer is a real passion! It's a job in which you really flourish: we love our animals, and we produce high-quality meat. But you mustn't be afraid of hard work! I firmly believe that the kind of livestock farming that we are involved in has a fine future ahead of it. We meet consumers’ expectations by providing them with a high-quality product made using traditional expertise, which can be tailored to different regions".